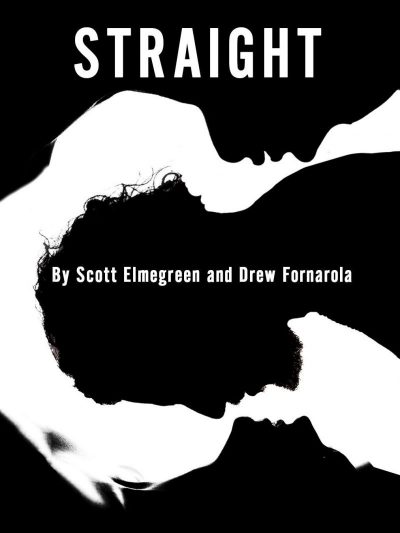 Join us for auditions for Straight by Scott Elmegreen and Drew Fornarola!

Play Synopsis: Meet Ben. Ben is a 26-year-old investment banker. Ben likes beer, sports, and Emily … and Chris. Straight is a provocative new play that deals with fidelity, sexuality, and identity in “post-equality” America. Funny, sad, sexy, and surprising, this three-character drama takes a hard look at the moral complex of a generation that prides itself on the pretense of acceptance.

We are looking for three actors to make up a strong ensemble:

– Ben: a 26-year-old investment banker living in Boston. He is waist deep in the murky waters of “the Odyssey period,” that much-discussed but little-understood phase between college and “adulthood” when careers idle, family life awaits, and roots are planted nowhere. He and Emily have been dating since their college days at U-Penn without much momentum, and his job in the financial sector provides plenty of money but little satisfaction or direction. Socially capable, casually masculine and always well-liked, Ben is used to winning at life. But he is becoming secretly anxious that the real world is not living up to its promises and worries that maybe “this is it.”

-Chris: a 20 (and three-quarters!)-year old history student at Boston College. He likes beer, sarcasm and irony but mostly uses them as a front to mask more deep-seated insecurities. He is socially precocious and, perhaps in compensation for his age, outwardly confident in his interactions with Ben and Emily, making his rare moments of vulnerability surprising, if logical upon reflection. He is appealing, in a boyish way, and he knows it, though he wouldn’t admit that even to himself.

– Emily: 27 and nearing the end of her time in purgatory as a Ph.D. candidate in bioinformatics at Harvard. Older than Ben but still a student, Emily looks to him as her window to the “real world,” which she sees as the prize waiting for her at the end of the long tunnel of her studies. Emily holds herself to the highest standards but without taking herself too seriously. She is quirky, optimistic, social, trusting and idealistic, mentally robust but young at heart.

Auditions will consist of cold-readings from the script that will be provided on site.

Please bring a copy of your headshot and resume (if you have one).