Audition for the Legend of Georgia McBride! 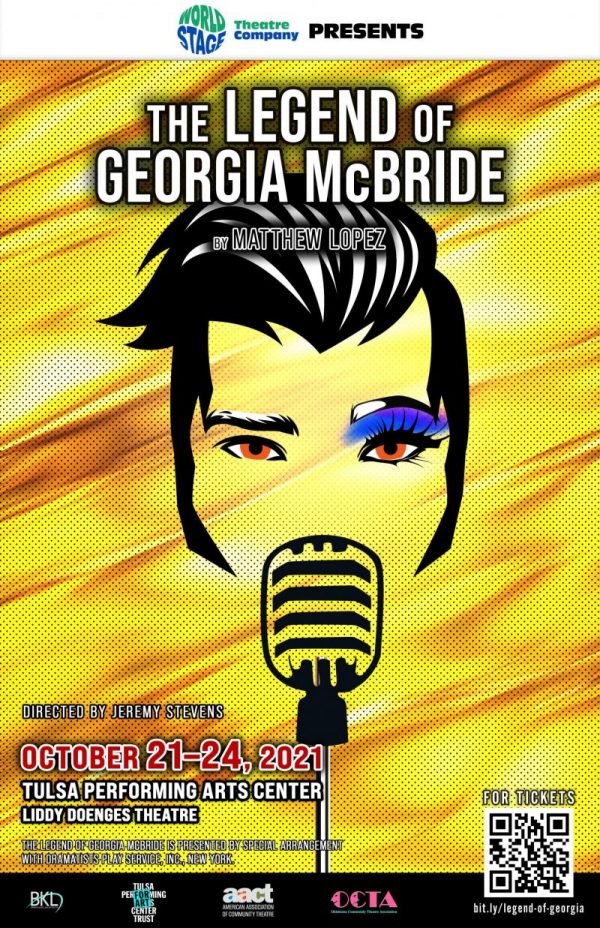 Lip Sync to be a Legend!
OPEN AUDITIONS & CALLBACKS FOR VARIOUS AGES, GENDERS, AND ETHNICITIES
When? Saturday, August 28, 1:00pm – 4:00pm
Sunday, August 29, 1:00pm – 4:00pm
Monday, August 30th call-backs by invitation only and only if necessary
Where?  Dennis R. Neill Equality Center, 621 E 4th Street, Tulsa, OK. 74120
World Stage Theatre Company will be holding auditions for the big-hearted, drag-tastic comedy, The Legend of Georgia McBride by Matthew Lopez.
While the show contains plenty of musical moments, it is not a musical.
Directed by: Jeremy Stevens
SHOW DATES: October 21-24, 2021
SYNOPSIS
Casey is an Elvis impersonator with everything going for him, including a flashy sequin jumpsuit. But just like that he loses his gig, rent is overdue and his wife announces a baby on the way. So when Elvis leaves the building and a drag show moves in, “The King” transforms into an all-out queen with the help of some new friends who become the second family Casey never saw coming. With snappy zingers and dance-worthy numbers, this wildly entertaining story will challenge your assumptions with extraordinary humor and depth.
ROLES AVAILABLE (there are five actors in this production, some roles are dual)
CASEY/GEORGIA: Male 20 – 30 (Caucasian)
Casey: Charismatic and good-looking small-town high school football star turned Elvis impersonator; has the biggest of hearts and loves his wife ferociously; dreams big, if not always practically; his charm and optimism are infectious; hasn’t had to grow up and take real responsibility for his life/family just yet; an artist who hasn’t yet found his voice.
Georgia: A wholly original drag queen with Elvis, country and rock ‘n’ roll roots; gritty, edgy, sexy, a force of nature; a transcendent artist who inspires her audiences to dream of a better life; vulnerable, driven, responsible, and completely self-possessed; joyous and thrilling.
NOTE: Role requires dancing in heels, lip-syncing, singing, and playing guitar.
J0: Female 20 – 30 (African-American/Latina)
Casey’s wife; a hard-headed woman married to a soft-hearted man; a realist who’s prone to being fatalistic, she grounds him, while he enables her to breathe and dream; tough without being bitchy, firm without being brittle; a steel rod for a spine; she loves him deeply and he’s the only person she feels safe showing her vulnerability to; works multiple service jobs struggling to keep them afloat and it’s taken a toll.
JASON/REXY: Male 22 – Mid 30s (Open ethnicity/gender)
Rexy: fabulously fierce and feisty sharp-tongued queen with a dark past; a trashy gal who fancies herself the most sophisticated in the room; loves boys and booze and thrives on conflict; a bit of a hot mess; can cut to the bone with her words; an unlikely moral compass with great respect for the history and art of drag.
Jason: Casey & Jo’s best friend and landlord; a sweet-natured working-class guy; became a father young, henpecked at home, can sometimes be a bit spineless–but loves his friends dearly; capable of surprising insight and warmth. Note: Role requires dancing in heels and lip-syncing.
EDDIE: Male 45 – 75 (Open ethnicity/gender)
Easily flustered and financially desperate owner of a struggling dive bar; rough around the edges, a bit of a walking ulcer, but a huge heart; ferociously loyal and loving to his makeshift family; a man of simple tastes and simple needs, he doesn’t take naturally to the stage as an emcee–but eventually becomes an amateur showman who loves the spotlight.
TRACY: Male 35 – 55 (Open ethnicity/gender)
Sweet-natured drag queen, and drag mother to Casey; her impeccable timing, wit, and charm can disarm anyone; deeply nurturing by nature, she thrives on being a mentor, but is ruthlessly pragmatic
when she needs to be; ready to find a home and build something meaningful and lasting; equal parts inspiration and desperation. The role requires dancing in heels and lip-syncing.
AUDITION REQUIREMENTS
This is a simple but unique general audition for this show as ALL auditionees will only need to prepare a dynamic lip-sync performance of one of the following five songs:
’It’s Raining Men’ – The Weather Girls
’Jolene’ – Dolly Parton
’Supermodel (You better work) – RuPaul
’Vogue’ – Madonna
“Work Bitch” – Britney Spears
“Boys” by Lizzo
Props are welcome but not required. Songs will be provided for your audition. You will not need to perform the whole song. Just show you can work a room! Callbacks will take place the next day with readings from the script.
We cannot wait to see you!